What Causes Bunions & What You Can Do About Them

What Causes Bunions & What You Can Do About Them

More than 40% of older adults develop bunions in their lifetime. In this article, pedorthists at Kintec share what causes bunions, and what to do about it. Let’s start by answering the most important question: what is a bunion?

What is a bunion?

A bunion is a common, progressive bony disorder. It results in a bump on the side of the main joint of your big toe. However, a bunion is more than just a bump; it’s a result of significant changes to the bony architecture of the foot.

These changes start with the big toe – or hallux – moving toward the other toes. This makes it appear crooked, which is called hallux valgus. This movement can progress over time, resulting in a larger bump and painful symptoms such as inflammation and stiffness in the joint. 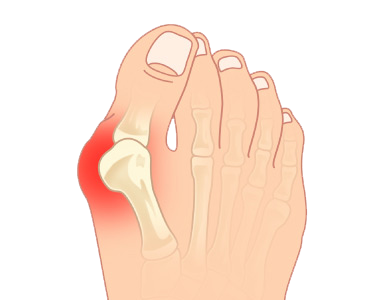 Symptoms usually become noticeable later in the development of the bunion. However, some people never experience symptoms. Bunion symptoms may include:

Once a bunion has formed, it won’t disappear on its own. In fact, without proper treatment, it often gets worse over time. It’s common for people to blame tight or ill-fitting shoes for causing bunions – but it’s not quite that simple.

While footwear can contribute to bunion symptoms, it’s not the only cause. Many researchers say hereditary factors are to blame.

While you do not directly inherit a bunion, you can inherit certain foot structures that encourage them to develop. The most common conditions and factors that increase the risk of bunion development, include:

Overpronation
Overpronation changes how the big toe experiences stress during walking and running. When the heel tilts toward the inside of the foot, the first metatarsal bone is forced upwards, impacting how the first MTP joint bends. It also causes the small muscles within the foot to pull on the hallux, encouraging it to move toward the other toes.

Arthritis
Osteoarthritis, and systemic arthritis conditions such as rheumatoid arthritis, can encourage bunion development. Arthritis causes inflammation of the joints, damage to joint capsules and lining, and development of bony deformities. If arthritis attacks the first MTP joint, this can result in bunion formation.

It is worth noting instability of this first ray at the end of your walking stride. It is when your heel raises, and a majority of your body weight focuses on the first ray. Without adequate stability, loading them can create forces that cause the first metatarsal bone itself to start rotating and deviating outward.

Injuries to the first metatarsophalangeal joint
An existing injury to the first MTP joint can contribute to bunion progression by damaging the joint capsule, encouraging bony overgrowth, and damaging soft tissues that stabilize the bone.

The type of shoes you wear can play a significant role in the development and worsening of bunions. Shoes with tight toe boxes or high heels may encourage symptoms to occur sooner or aggravate existing bunions, especially in people who have a genetic risk of developing them. Keep in mind, bunions progress more rapidly for some people and slower for others; not every case is the same.

Will I develop bunions?

The best predictor of bunion development is looking at family history. You are more at risk if your parents – or close relatives – have bunions. Research has shown some benefit to treating the bunion early on before a more severe deformity appears.

Treatments can include changes to footwear, physiotherapy, manual therapy, custom orthotics, injections to the joint, and surgery. If you see that a bunion is developing, or you have looked at your parent’s feet and know what might be coming, take proactive steps now. A Kintec pedorthist can evaluate your feet and see can be done to help lessen the risk.

Dayton P, Kauwe M, Feilmeier M. Is our current paradigm for evaluation and management of the bunion deformity flawed? A discussion of procedure philosophy relative to anatomy. The Journal of Foot & Ankle Surgery 54 102-111, 2015.

To Kai-Tsun M. Bunion: To treat or not to treat. Editorial in Journal of Orthopaedics, Trauma and Rehabilitation, 19, 2015.

Dayton P, Feimeier M, Kauwe M, Holmes C, McArdle A, Coleman N. Observe changes in radiographic measurements of the first ray after frontal and transverse plane rotation of the hallux: does the hallux drive the metatarsal in a bunion deformity. The Journal of Foot & Ankle Surgery, 2014.