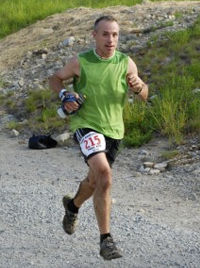 In 2004 I decided to test my fitness level by running the Vancouver International Marathon.  Having been a runner off and on for the majority of my life I considered the challenge of the marathon to be both manageable and easy.  Well, on May 2, 2004 – Race day for the old VIM that year, I gained a new perspective on running.  It could be tough!

Previous to my first marathon I had run several 10K races and half marathons without undertaking any sort of training regimen.  Running was simply an activity that provided intrinsic pleasure and unlimited feelings of freedom.  The 2004 VIM woke me up in the sense that it informed me that I had a lot to learn about the finer details of running.  I decided then to become a more focussed runner.  A runner intent on gaining knowledge and insight that would help me become the best runner I could be.

Since 2004 I have run 15 marathons, including seven consecutive Vancouvers, over 20 ultramarathons, and several shorter races ranging from the five kilometre distance to the half marathon.  This summer I will be running in my first 100 mile race – the Western States Endurance Run.  I am on a constant quest towards improving my marathon personal best of 2:50:53, my Knee Knackering North Shore Trail Run PB of 5:35:32, and my Diez Vista 50K Trail Run PB of 4:48.

Of course there are many other races and events that I am hoping to participate in in the coming years, with Western States being the obvious one at the top of my list.  In my opinion, the beauty of running is that it provides endless amounts of opportunities for a runner to set personal goals – whether they are to improve fitness, to travel to new places, to make new friends, to run faster times, or to achieve any other sort of personal satisfaction.