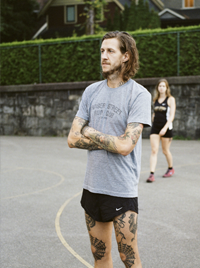 Jesse spent his youth traveling the world as a up and coming skateboarder. For the past 5 years he has been working for a non-profit in the Downtown East Side as a carpenter. He ran his first marathon when his wife Michelle secretly signed him up for Vancouver’s BMO marathon.

Since then, he has developed a love for all forms of running, whether racing road marathons, longer distance trail races or a hard track workout. Jesse is at his happiest when he is exploring new trails or roads on his own two feet.

He is looking forward to another year full of running adventures!